Calls from production companies looking for quiz show contestants in the UK. I've done Eggheads and 15-to-1 in the past. Great fun and you could win money. Reccomended. Meanwhile, if you are a production company looking to cast, send details to This email address is being protected from spambots. You need JavaScript enabled to view it.

I got an email today which came from a disgruntled Eggheads contestant applicant.

"Eggheads is a farce, we auditioned, thrashed the team we played against. Few days later we were told we didn’t get on the show. That was that, but a few weeks later who should be on the show but the team we thrashed. So when they say is there anyone out there that can beat them, yes us but they wont put strong teams on!!!!!"

Unfortunately TV quiz shows are entertainment rather than sport, and the producers of Eggheads (as in all game shows) are always looking for contestants who they think will make good and interesting telly rather than setting out to apply Olympic standards of  fairness.

I’m not defending their decision to not have you on the show by any means but it’s worth remembering that there are other factors. For instance, profiling.

This means that if there are already too many applicants with a similar gender, race and age profile as your team, then you may struggle to get on. The producers want to see on-screen variety.

Handily, they've put all the detail on a flyer: 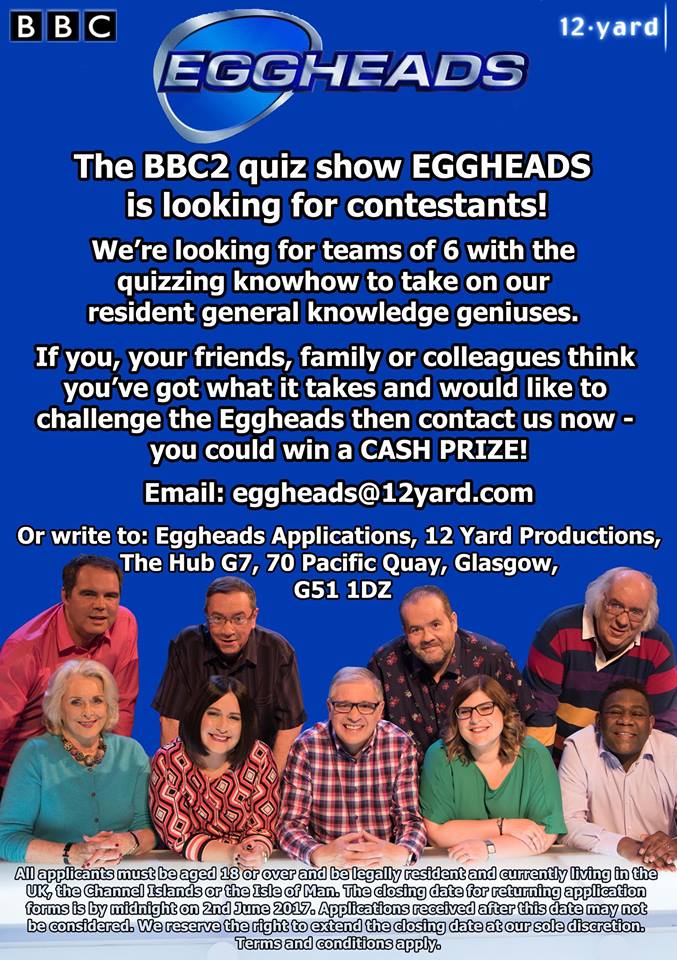 A geezer from the BBC quiz show Eggheads has been in touch, looking for contestants for the next series of the show.

To take part you need a team of 6 (the 5 you see on screen and one reserve player). You can apply online at www.12yard.com/eggheads

Filming for the series will take place in Glasgow in January and March. The guy who got in touch says their looking for teams of quizmasters

One team once won £75,000 - which works out as £15 grand each, so you never know. I mgiht apply for this myself, so if you know loads of stuff and you want to be in my team, This email address is being protected from spambots. You need JavaScript enabled to view it..

The Victoria Works Pub in Bath is looking for a quizmaster. If you're in the area and fancy a shot, get in touch with Rowan by email This email address is being protected from spambots. You need JavaScript enabled to view it.

Quiz details: likely to be a Monday night

The National Lottery show In It To Win It needs audience members for recordings of the show in Glasgow in September.

You could be there and feel the excitement of Dale as well as his big
Read more: Touch Dale Winton This September
Page 4 of 4